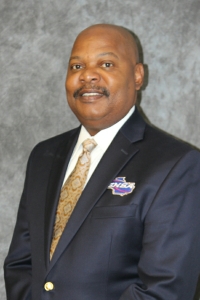 Carror came to the GHSA in 2013 and serves as Director of Compliance and Investigations. He also serves as liaison to High School and College Coaches, and works with Sportsmanship initiatives and Eligibility.

Carror and his late wife, Sue, are the parents of two wonderful children (O’sheta and Maresa) and proud grandparents of Justin and Logan.

Carror is a former 31-year high school teaching and coaching veteran from Wrightsville, Georgia, graduating from Johnson County High and Fort Valley State University. He excelled on both levels in football and track.  Carror earned his master’s degree from Nova Southeastern University.

Carror currently is a 20-year Georgia Athletic Coaches Association Board of Directors member and serves on the GACA Hall of Fame Committee.  He is also a GACA Past President (2008) and former State Football Chairman, 2009-2011. He served as GACA North/South All Star Assistant Football coach in 2001 & 2003 and as GACA Head Coach in 2008 (with a win).  Carror was GACA Track & Field Coach of The Year twice. And he received the GACA Life Time Membership Award for outstanding achievement with youth/coaching in 2010. In February of 2014 Carror was presented The Atlanta Falcon’s Coach of the Year Award. In July of 2016, Carror was presented with the GACA Sam Burke Award.

Carror has been appointed to the NFHS Citizenship/Equity Committee, serving a four year term of office representing the NFHS Section 3 states.

Carror’s hobbies include spending time with family and friends, listening to music, cooking on the grill, and processing pecans.