Omar Hernandez of Dalton High School has been selected the 2018-19 Gatorade National Boys Soccer Player of the Year. He was presented the prestigious award Tuesday afternoon in a ceremony at his school.

Hernandez, the state’s returning Gatorade Player of the Year, is a 5-foot-10, 142-pound senior midfielder who led the Catamounts to a 23-0 record and the Class AAAAAA state championship this past season. Hernandez recorded 16 goals and 17 assists, setting up two of Dalton’s tallies against Gainesville in a 4-1 win that captured the state title. The Catamounts finished the season ranked as the nation’s No. 1 team both in the USA TODAY Super 25 and the Top Drawer Soccer FAB 50.

A two-time first-team All-State selection and the Atlanta Journal-Constitution’s Co-Player of the Year, Hernandez concluded his prep soccer career with 78 goals and 64 assists, both school records.

Hernandez has volunteered locally as a youth soccer coach and works nights and weekends on the manufacturing line at a local carpet factory. Hernandez has maintained a weighted 3.30 GPA in the classroom. He has signed a National Letter of Intent to play soccer on scholarship at Wake Forest University this fall.

The Gatorade Player of the Year award is the most prestigious award in high school sports. It recognizes the nation’s most elite high school student-athletes in the District of Columbia and each of the 50 states, choosing winners in 12 different sports: football, girls volleyball, boys and girls cross country, boys and girls basketball, boys and girls soccer, baseball, softball, and boys and girls track and field; and awards one National Player of the Year in each sport. Student-athletes are evaluated not only for outstanding athletic excellence, but also high standards of academic achievement and exemplary character.

Since the program’s inception in 1985, Gatorade Player of the Year has awarded a distinguished list of athletes including Peyton Manning, Abby Wambach, Karl-Anthony Towns, Derek Jeter and many other sports icons. For more information, visit www.Gatorade.com/POY. 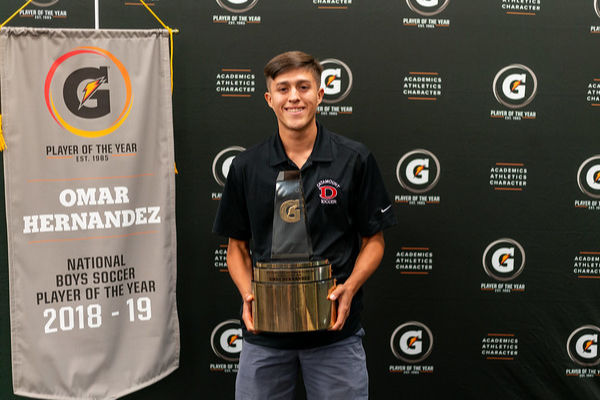