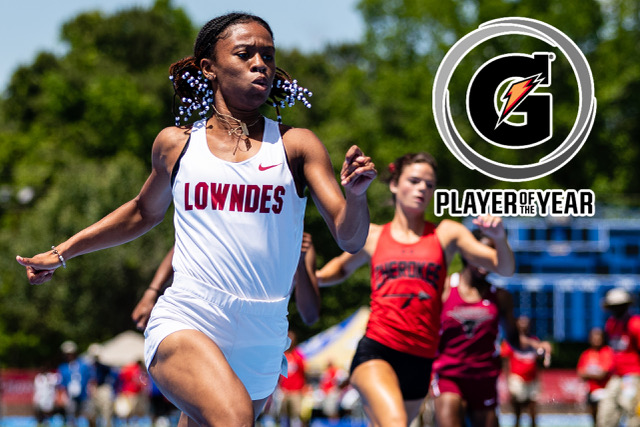 CHICAGO (June 30, 2022) — In its 37th year of honoring the nation’s best high school athletes, Gatorade today announced Kaniya Johnson of Lowndes High School is the 2021-22 Gatorade Georgia Girls Track & Field Player of the Year. Johnson is the first Gatorade Georgia Girls Track & Field Player of the Year to be chosen from Lowndes High School.
The award, which recognizes not only outstanding athletic excellence, but also high standards of academic achievement and exemplary character demonstrated on and off the field, distinguishes Johnson as Georgia’s best high school girls track & field athlete. Now a finalist for the prestigious Gatorade National Girls Track & Field Player of the Year award to be announced in July, Johnson joins an elite alumni association of state award-winners in 12 sports, including Lolo Jones (1997-98, Roosevelt High School, Iowa), Allyson Felix (2002-03, Los Angeles Baptist High School, Calif.), Robert Griffin III (2006-07, Copperas Cove High School, Texas), Grant Fisher (2014-15 & 2013-14, Grand Blanc High School, Mich.) and Candace Hill (2014-15, Rockdale County High School, Ga.).
The 5-foot-3 senior sprinter swept the 100- and 200-meter dash at the Class 7A state meet this past season, sparking the Vikings to the state title as a team with two personal-best performances. The child of oft-transferred parents serving in the armed services, Johnson owns seven combined state titles in Georgia and South Carolina. At the time of her selection, her Georgia state-record clocking of 11.26 seconds in the 100 was tied for the No. 1 time among prep girls competitors in 2022 and tied for No. 23 in U.S. girls prep history. Johnson’s 200 time of 23.20 ranked No. 5 in 2022 as well as No. 35 all-time. Also the 2022 Millrose Games 300-meter indoor champion, she graduates with two state records in Georgia and another in South Carolina.
A four-year veteran of Junior ROTC and a multi-time ribbon recipient in that capacity, Johnson has volunteered on behalf of multiple community service organizations as a cadet. Due to assigned military billets, Johnson’s family has moved every 4 years, residing in Louisiana, North Carolina, South Carolina, Virginia, New York and Georgia. She was Commander of her ROTC class in New Jersey, she was also the flight sergeant of her class with the Air Force Junior ROTC program. She has donated her time coaching youth track athletes, especially as part of the Fast Forward Track Club. “Johnson was already a budding star before she moved here from South Carolina last year, but she truly put on a show for track fans here in Georgia this year,” said Ryan McClay, editor of Milesplit Georgia. “She had an immediate impact as one of the top sprinters in the state, but where she really left her mark was at the 7A state meet, where she put up top individual performances in the 100 and 200 while also helping both of her relay teams win, which propelled Lowndes County to the team title, the first in school history.”
Johnson has maintained a 3.39 weighted GPA in the classroom. She has signed a National Letter of Intent to compete on an athletic scholarship at Florida State University this fall.
The Gatorade Player of the Year program annually recognizes one winner in the District of Columbia and each of the 50 states that sanction high school football, girls volleyball, boys and girls cross country, boys and girls basketball, boys and girls soccer, baseball, softball, and boys and girls track & field, and awards one National Player of the Year in each sport. The selection process is administered by the Gatorade Player of the Year Selection Committee, which leverages experts including coaches, scouts, media and others as sources to help evaluate and determine the state winners in each sport.
Johnson joins recent Gatorade Georgia Girls Track & Field Players of the Year Janae Profit (2020-21, Dunwoody High School), Jasmine Jones (2019-20 & 2018-19, Greater Atlanta Christian School), and Kennedy Simon (2017-18, Westlake High School), among the state’s list of former award winners.
Gatorade has a long-standing history of serving athlete communities and understands how sports instill valuable lifelong skills on and off the field. Through Gatorade’s “Play it Forward” platform, Johnson has the opportunity to award a $1,000 grant to a local or national organization of their choosing that helps young athletes realize the benefits of playing sports. Johnson is also eligible to submit a short video explaining why the organization they chose is deserving of one of twelve $10,000 spotlight grants, which will be announced throughout the year. To date, Gatorade Player of the Year winners’ grants have totaled more than $3.5 million across more than 1,300 organizations.
Since the program’s inception in 1985, Gatorade Player of the Year award recipients have won hundreds of professional and college championships, and many have also turned into pillars in their communities, becoming coaches, business owners and educators.
To learn more about the Gatorade Player of the Year program, check out past winners or to nominate student-athletes, visit playeroftheyear.gatorade.com or follow us on social media on Facebook at facebook.com/GatoradePOY, Instagram at instagram.com/Gatorade and Twitter at twitter.com/Gatorade.