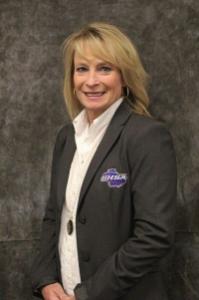 Penny joined the GHSA staff in July of 2016. As an Associate Director, her responsibilities include the administration of Sideline and Competitive Cheerleading, Competitive Dance, Gymnastics and Student Leadership. She is a graduate of University of West Georgia with a B.S. in Health and Physical Education.

Penny and her husband, Bob, have a growing family. Her oldest son, Kip Burdette and his wife Sara, also live in Forsyth. Her younger son, Dan Burdette, his wife Chelsea and their son Skylar live in Macon. Both sons coach football at Mary Persons HS. Penny’s father is Dan Pitts who coached at Mary Persons for 41 years.

Penny is from Forsyth, Georgia where she taught in Monroe County and coached cheerleading at Mary Persons HS for 13 years. A member of the Georgia Cheerleading Coaches Association, she held many offices including secretary, vice president and president. Her team was named GA Team of the year in 2007 and she was named Coach of the Year in 2010. She also coached tennis and gymnastics for many years as she taught in 5 different counties throughout her teaching career.

In the fall of 2010, Penny became the Spirit Coordinator over cheerleading and dance for Mercer University, starting the dance program for spirit. In 2013, she worked for the Bears inaugural football season and was the cheerleading coach until 2016.