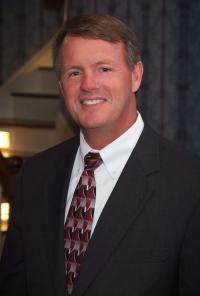 Robin began his tenure as GHSA Executive Director in June, 2017.  As the Executive Director, his responsibilities include the day-to-day administration of the GHSA, by-law interpretations, student eligibility, hardships, and the Coach’s Education Program.

Robin  holds a B.S.Ed. and M.Ed. from Valdosta State University and an Ed.D. from Nova Southeastern University.  He previously served in the Houston County School System as principal of Northside High School, Assistant Superintendent for School Operations and Superintendent of Schools. He also served as high school principal in Jackson and Charlton Counties. During his career in education Dr. Hines has served as a teacher, coach, athletic director, assistant principal, principal, assistant superintendent and superintendent.

Robin is from Thomasville, GA and is married to his college sweetheart, the former Kim Dilling of Warner Robins. Kim is a retired Kindergarten teacher. They have three children, Melissa, Ashley and Bobby.

Melissa is a special education teacher in the Madison County School System and is married to Brad Kirk who is a Pharmacist in Danielsville ,GA. They have two children, Bryce and Ellie. Ashley is the Director of Women’s Ministries for FCA at the University of Georgia and is married to Will Reynolds, a tennis administrator at UGA. They have three children, Piper, Jacob and Turner. Bobby is a graduate of UGA in Athletic Training and will complete his doctorate in Physical Therapy in May 2021. He is married to the former Rachel Wheeler of Seattle, WA. Rachel is a soccer coach at Piedmont College.

Robin is a motorcycle enthusiast, musician and enjoys golf.