Facial Hair, Hair and “The Assassin”

Below are of issues that need addressing with all our officials and coaches across the state:

2) If a wrestler has facial hair, other than a neatly trimmed mustache that doesn’t extend below the lower lip, the only way the wrestler can have facial hair is if they wear a full-face mask. If a wrestler has hair on their chin, a chin cup on their head gear is not good enough to not have to shave. The options are shave or wear a face mask.

3) It has been brought to our attention about a reconstituted wrestling move titled: “The Assassin”. It is a variation of the Kolat maneuver that has gained recent notoriety and has several elements that ranges between unnecessary roughness, potentially dangerous to illegal hold/maneuver. The attached illustration was commissioned by Mr. Jim Vreeland, former Ohio Statewide Wrestling Interpreter and a very talented artist by the name of Steve Long. Steve has been a long-time friend and contributor of the Ohio High School Athletic Association (OHSAA) and has lent his artistic talents to capturing various moves, holds and maneuvers.

If you have any questions, please do not hesitate to contact me. 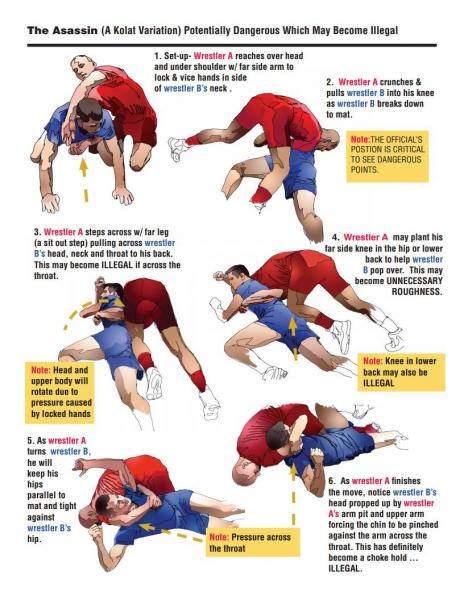